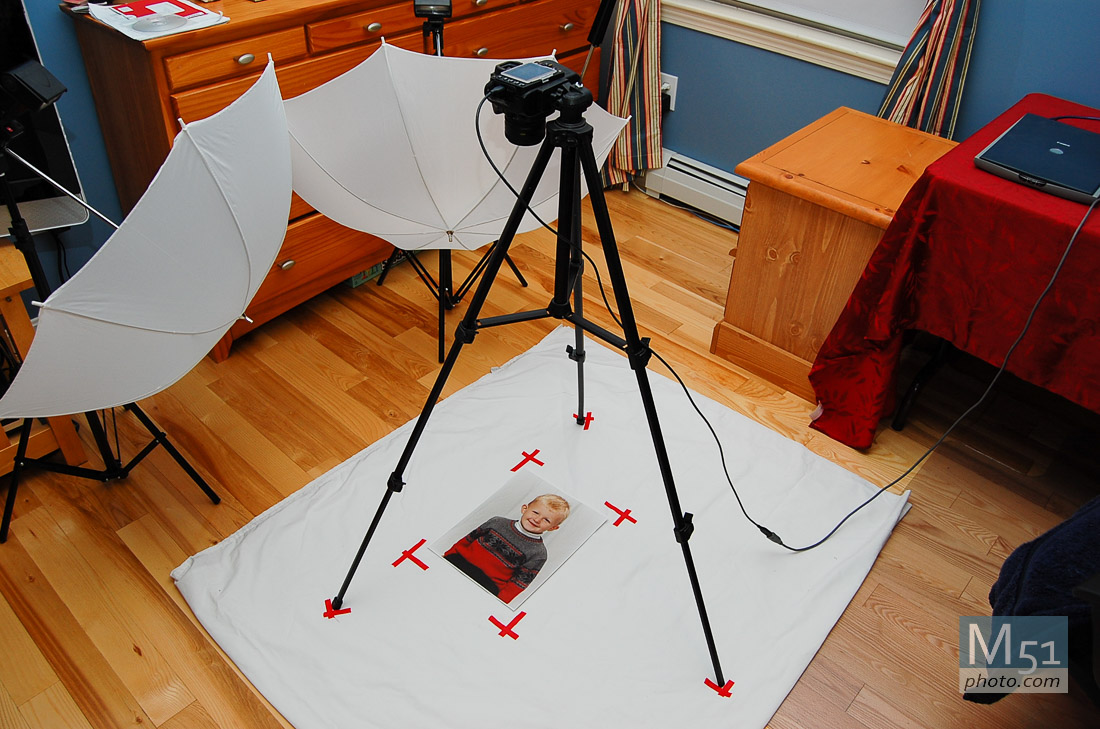 I wanted to see if I could beat my inexpensive Canon LiDE 20 flatbed scanner with my expensive Nikon D90.  The goal – to scan a LOT faster than my flatbed scanner.  Imagine scanning literally as fast as you could flip through photographs, all sizes, even sizes that don’t fit on a scanner.  Artwork, photo prints, books whatever you need to scan. 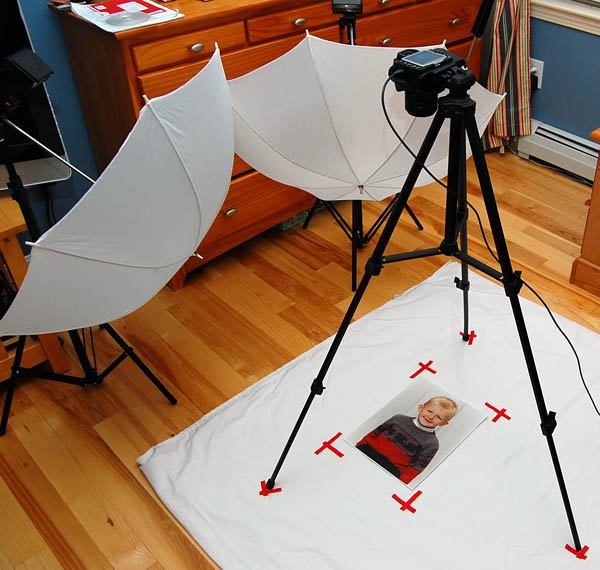 The Setup: Before I sunk any money into this idea I figured I could get away with what I already had as a proof of concept.  A less than ideal tripod and a fixed focus lens.  You can buy copy stands, but the tripod would be good enough for a proof of concept.  I tired my trusty 35 f1.8 first, then ended up with my 50 f1.8.  A fixed focus lens in practice is a lot better than a zoom  since the zoom is plagued with constant lens creep when looking down.  I also added in two flashes with shoot through umbrellas and tried a teatherd shoot using the currently free and awesome DCamCapture software.  More on teatherd shooting later in another post.  To make life even easier for mass production I also used manual exposure.

The Results: In the end the results were mixed.  I spent a whole lot of time trying to beat the flatbed scanner and came close, but never actually beat it. The premise, that once I had worked out the details I could go into mass production mode and the setup time would quickly pay for itself in the scan time savings. 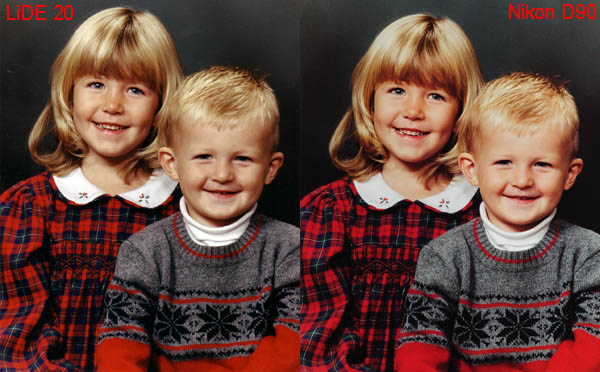 The left photo was taken stock with my old Canon LiDE 20 direct into Photoshop CS3 via it’s plugin – no touch-ups.  The photo on the right was taken with my D90, 50mm F1.8 and a two flashes with NO softbox.  The photo was removed from the picture frame and laying flat on a white backdrop.  This was the very best that I could do and even then it was not as good as the flatbed scanner.

You can see several other variations and larger sizes of my attempts with explanations on my photo site.

In practice, scanning with your camera does not appear to offer equal or better results than a flatbed scanner.  However, once setup and workflow is worked out, its faster.  But you still need to adjust levels, etc when you get into your photo editing software.  Though I’m not inclined to use this technique unless it’s absolutely necessary due to time constraints, size of original, or inability to remove the original from its frame/mount.

Even though shooting through glass yielded obviously poorer results than taking the photos out of the frames, I really think this is where this type of shooting will be most useful.  If you have the material out of the frame and available to you for any length of time, scan it, don’t shoot it.  But in situations where you might not have lot of time this is a workable solution.  Example: Your far away grandmother died and you want to make sure you preserve everything you can before your aunt and uncle sells the place and they don’t want you to touch anything.  I also found my best results were with a single flash.  If I were taking the photos on the wall, I think I would simply put a flash on a light-stand, set everything to full auto and click away as I moved down the hallway (hummm… thats not what I tested).  Anyway I hope you find this helpful.

A Tale of Color Management

Is it time to Clean Your DSLR Sensor? 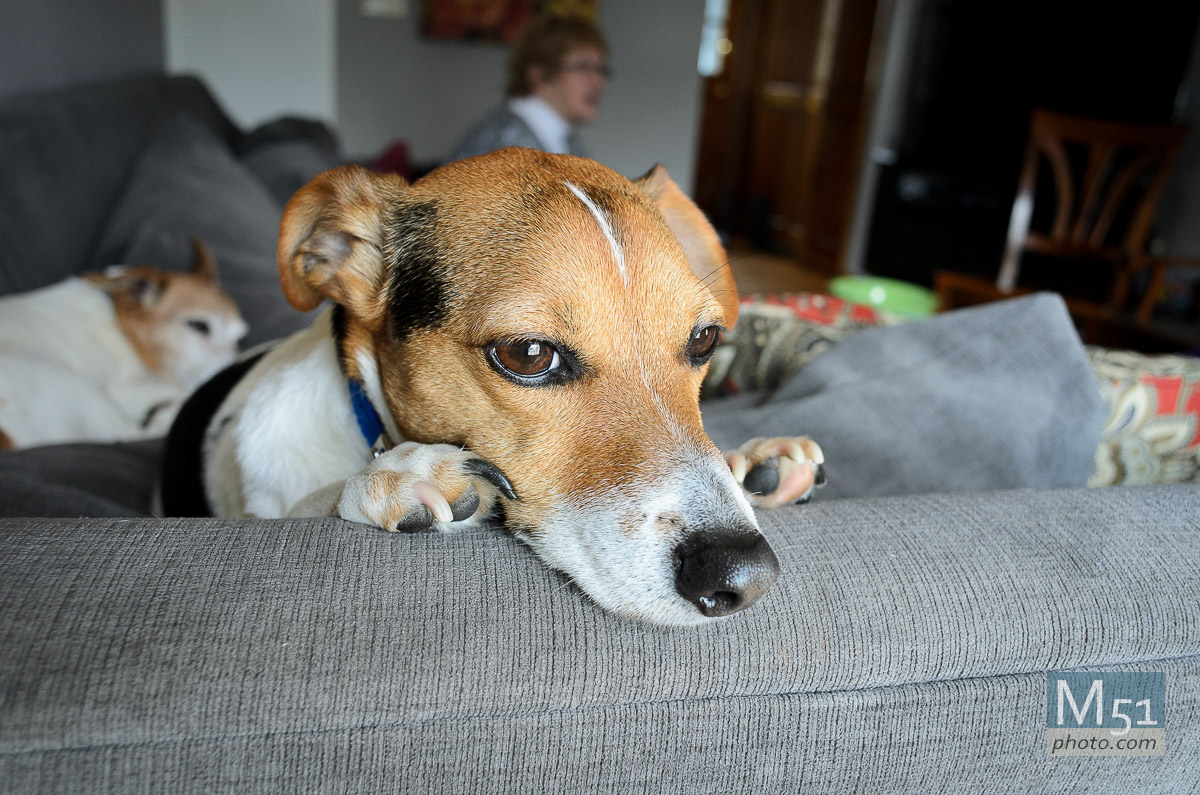 3 thoughts on “D90 Camera as a Flatbed Scanner”